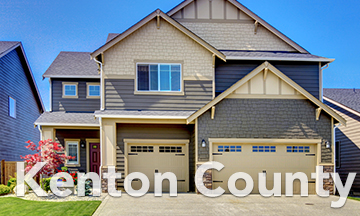 Rural acreage, rolling hills, and bustling urban centers converge in fast-growing Kenton County, separated from Cincinnati by the Ohio River. Particularly from the waterfront area of Covington south toward Interstate 275, aggressive development has made Newton County the most densely populated of the counties in northern Kentucky. Interstate 75/71 traverses the west side of the county, ensuring quick commutes to regional destinations.

The City of Covington  is located across the Ohio River from downtown Cincinnati, Covington is well known for its historic neighborhoods, including Licking-Riverside, MainStrasse Village and Wallace Woods as well as for it's downtown commercial district.

The City of Crestview Hills is a suburban community of beautiful homes with lakeside and golf-course views in picturesque neighborhoods.

The City of Edgewood is known for its two large parks, Presidents Park and Freedom Park. These two parks along with Victory Park which is a small pocket park, are all within the city limits.  Edgewood is a comfortable, cozy, and affordable community "Where every day is a walk in the park".

The City of Ft. Mitchell is a small town community with all the big amenities of a big city. Located just minutes from downtown Cincinnati, Ft. Mitchell residents enjoy quite neighborhoods, serene parks, and excellent schools.

The City of Villa Hills is a special place to live. Whether you are a longtime resident, planning to buy a home here, or just making a visit, you will be part of the #1 suburb in Greater Cincinnati designated by Cincy Magazine in 2014.